Sri Harmandir Sahib, also known as Sri Darbar Sahib or Golden Temple, (on account of its scenic beauty and golden coating for English speaking world), is named after Hari (God) the temple of God. The Sikhs all over the world, daily wish to pay visit to Sri Amritsar and to pay obeisance at Sri Harmandir Sahib in their Ardas.Guru Arjan Sahib, the Fifth Nanak, conceived the idea of creating a central place of worship for the Sikhs and he himself designed the architecture of Sri Harmandir Sahib. Earlier the planning to excavate the holy tank (Amritsar or Amrit Sarovar) was chalked out by Guru Amardas Sahib, the Third Nanak, but it was executed by Guru Ramdas Sahib under the supervision of Baba Budha Ji. The land for the site was acquired by the earlier Guru Sahibs on payment or free of cost from the Zamindars (landlords) of native villages. The plan to establish a town settlement was also made. Therefore, the construction work on the Sarovar (the tank) and the town started simultaneously in 1570. The work on both projects completed in 1577 A.D.The land for the site was bought by the Guru Ram Das Sahib on payment from the Zamindars (landlords) of native villages. Rare Old Photograph of Sri Harmandir Sahib The Golden Temple Amritsar Guru Arjan Sahib got its foundation laid by a Muslim saint Hazrat Mian Mir ji of Lahore on 1st of Magh, 1645 Bikrmi Samvat (December, 1588). 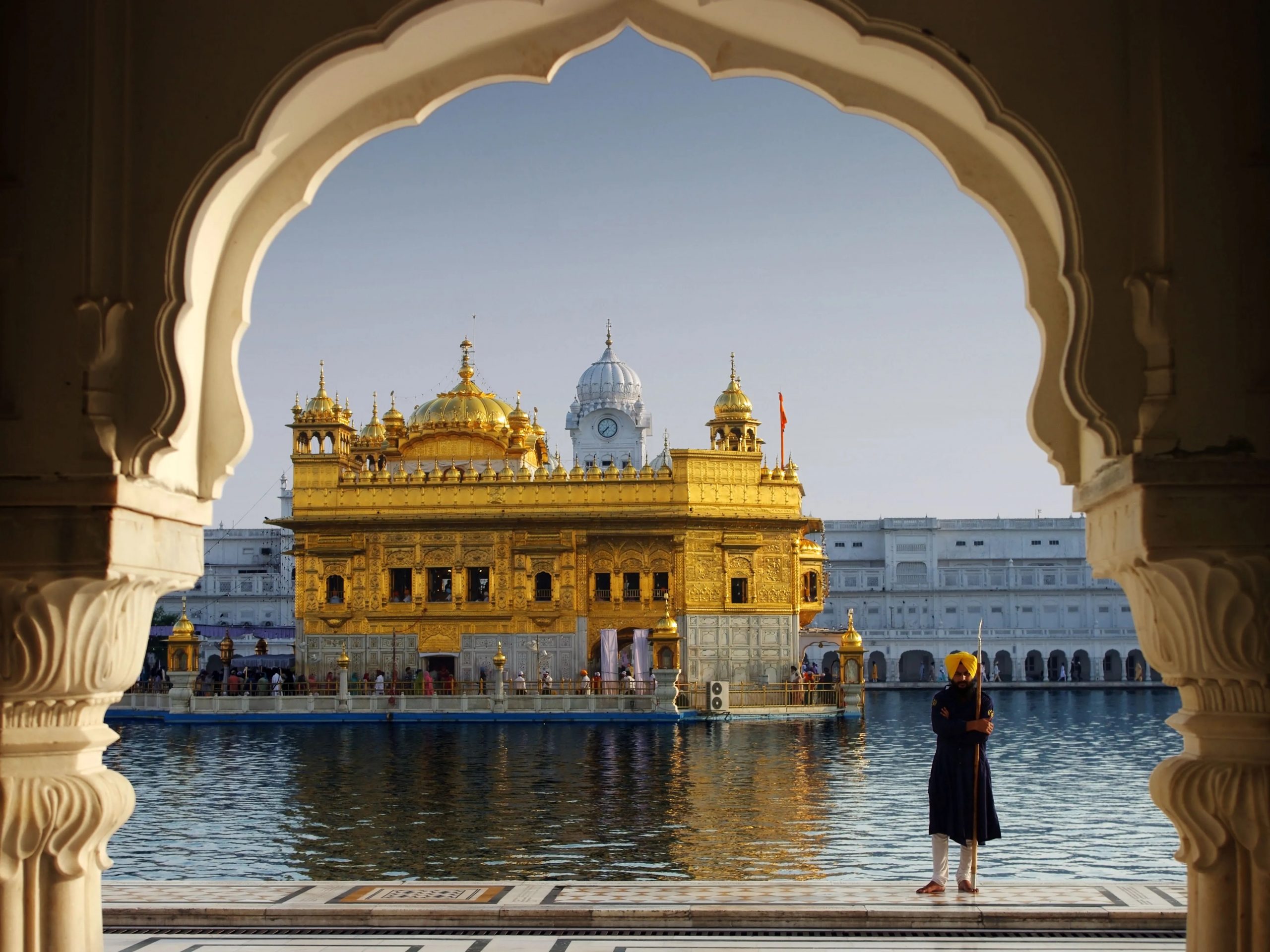 The construction work was directly supervised by Guru Arjan Sahib himself and he was assisted by prominent Sikh personalities like Baba Budha Ji, Bhai Gurdas Ji, Bhai Sahlo Ji, and many other devoted Sikhs. Unlike erecting the structure on the higher level (a tradition in Hindu Temple architecture), Guru Arjan Sahib got it built on the lower level and unlike Hindu Temples having only one gate for the entrance and exit, Guru Sahib got it open from four sides. Thus he created a symbol of a new faith, Sikhism. Guru Sahib made it accessible to every person without any distinction of caste, creed, sex, and religion. The building work completed in 1601 A.D. on Bhadoon Sudi 1st, 1661 Bikrmi Samvat (August/September 1604). Guru Arjan Sahib installed newly created Guru Granth Sahib, in Sri Harmandir Sahib and appointed Baba Budha Ji as its first Granthi i.e. the reader of Guru Granth Sahib. After this event, it attained the status of ‘Ath Sath Tirath’. Now the Sikh Nation had their own Tirath, a pilgrimage center, Old Photograph of Sri Harmandir Sahib The Golden Temple Amritsar Sri Harmandir Sahib, is built on a 67ft. square platform in the center of the Sarovar(tank). The temple itself is 40.5ft. square. It has a door each on the East, West, North, and South. The Darshani Deori (an arch) stands at the shore end of the causeway. The door frame of the arch is about 10ft in height and 8ft 6inches in breath.

The door panes are decorated with artistic style. It opens on to the causeway or bridge that leads to the main building of Sri Harmandir Sahib. It is 202 feet in length and 21 feet in width. The bridge is connected with the 13 feet wide ‘Pardakshna’ (circumambulatory path). It runs around the main shrine and it leads to the ‘Har ki Pauri’ (steps of God). On the first floor of “Har Ki Pauri”, there is continuous reading of Guru Granth Sahib. The main structure of Sri Harmandir Sahib, functionally as well as technically is a three-storied one. The front, which faces the bridge, is decorated with repeated cusped arches and the roof of the first floor is at the height of 26 feet and 9 inches. At the top of the first floor, 4 feet high parapet rises on all the sides which has also four ‘Mamtees’ on the four corners, and exactly on the top of the central hall of the main sanctuary rises the third story. It is a small square room and has three gates. A regular recitation of Guru Granth Sahib is also held there. On the top of this room stands the low fluted ‘Gumbaz’(dome) having lotus petal motif in relief at the base inverted lotus at the top which supports the “Kalash” having a beautiful “Chhatri” at the end. Its architecture represents a unique harmony between the Muslims and the Hindus way of construction work and this is considered the best architectural specimens of the world. It is often quoted that this architecture has created an independent Sikh school of architecture in the history of art in India.