Pangong Tso, Tibetan for “high grassland lake”, also referred to as Pangong Lake, is an endorheic lake in the Himalayas situated at a height of about 4,350 m (14,270 ft). It is 134 km (83 mi) long and extends from India to China. Approximately 60% of the length of the lake lies in China. The lake is 5 km (3.1 mi) wide at its broadest point. All together it covers 604 km2. During winter the lake freezes completely, despite being saline water. It is not part of the Indus river basin area and geographically a separate landlocked river basin. The lake is in the process of being identified under the Ramsar Convention as a wetland of international importance. This will be the first trans-boundary wetland in South Asia under the convention.

The crystal clear blue lake sprawls over an area of 100 kilometers across the borders of two countries in India and China. It is one of the charismatic lakes situated on the Changtang plateau in the eastern Ladakh region. Pangong Lake is also known by the name of Hollow Lake and appears as a clear symbol of nature craftsmanship. The brackish water plays with sunlight to produce different effects of light. One-third part of the lake lies in India while the remaining two-third lies in Tibet, a region controlled by China. A large chunk of streams that fill the lake is located in the Tibetan part. The lake is located just 5 hours drive from Leh in the Ladakh region of Jammu & Kashmir. The first glimpse of the tranquil, azure blue waters and shaky lakeshore remains etched in the memory of tourists. This area falls under army control and requires a pass from the deputy commissioner of Leh. During the winter season, the lake and its surroundings are engulfed by freezing temperatures. The surface of the lake becomes so solid that one can’t walk over it. On the surface of frozen Lake, a gala festival of ice skating is organized. It calls on a large number of skiers and ice skaters from several parts of the world. During this festival, tourists also get to see the local culture of the native people.

The route passes through the beautiful Ladakh countryside, over Chang La, the third highest motorable mountain pass in the world. Traces of snow along the road welcome us. One can cross the valley on a sinking road. The mountains in the backdrop appeared to be painted in the colors of green, brown, and violet. There is a mountaineering school, which imparts training in various degrees of rock climbing. 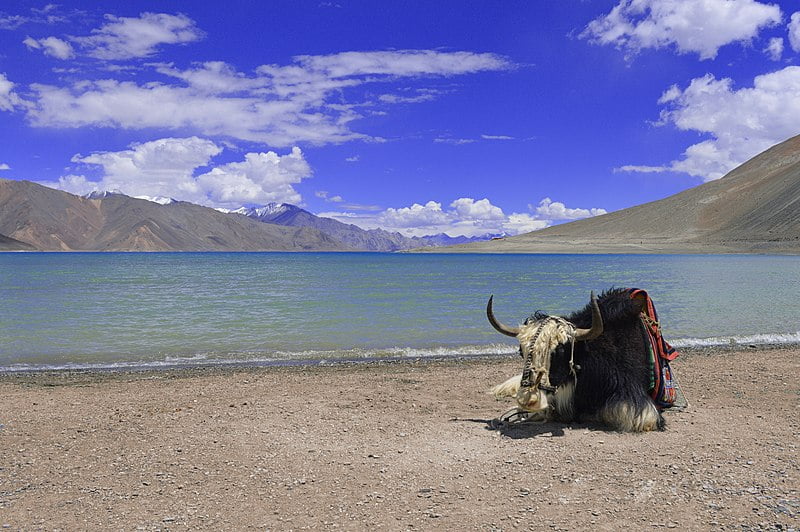