Zanskar (Ladakh: ཟངས་དཀར་) is a subdistrict or tehsil of the Kargil district, which lies in the eastern half of the Indian state of Jammu and Kashmir. The administrative center is Padum. Zanskar, together with the neighboring region of Ladakh, was briefly a part of the kingdom of Guge in Western Tibet.
The Zanskar Range is a mountain range in the Indian state of Jammu and Kashmir that separates Zanskar from Ladakh. The average height of the Zanskar Range is about 6,000 m (19,700 ft). Its eastern part is known as Rupshu. It also separates Kinnaur District from Spiti in Himachal Pradesh. The highest peaks of Himachal are in the Zanskar Range.

Zanskar covers an area of some 7,000 square kilometers (2,700 qs mi), at an elevation of 3,500-7,000 meters (11,500–23,000 feet). It consists of the country lying along the two main branches of the Zanskar River. The first, the Doda, has its source near the Pensi-la (4,400 m) (14,450 ft) mountain-pass and then flows south-eastwards along the main valley leading towards Padum, the capital of Zanskar.
The second branch is formed by two main tributaries known as Kargyag river, with its source near the Shingo La (5,091 m) (16,703 ft), and Tsarap river, with its source near the Baralacha-La. These two rivers unite below the village of Pure to form the Lungnak River (also known as the Lingti or Tsarap). The Lungnak river then flows north-westwards along a narrow gorge towards Zanskar’s central valley (known locally as guzheng Khor), where it unites with the Doda River to form the Zanskar river.

The Darcha–Padum trek through the wilderness of Zanskar provides a rare opportunity to see some breathtaking landscapes, especially at higher altitudes. It generally takes 9-10 days to complete this trek which involves crossing the Shingo La pass (16700 feet). Technically this is called a moderate trek, but, unless you are a seasoned trekker or mountaineer, let me assure you that it is not easy to trek in that rarefied atmosphere. To complete it you will have to go beyond your limits of physical endurance. 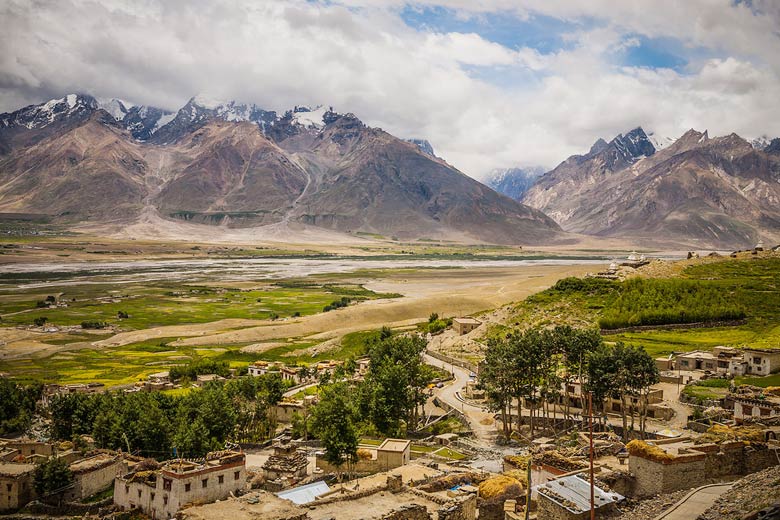