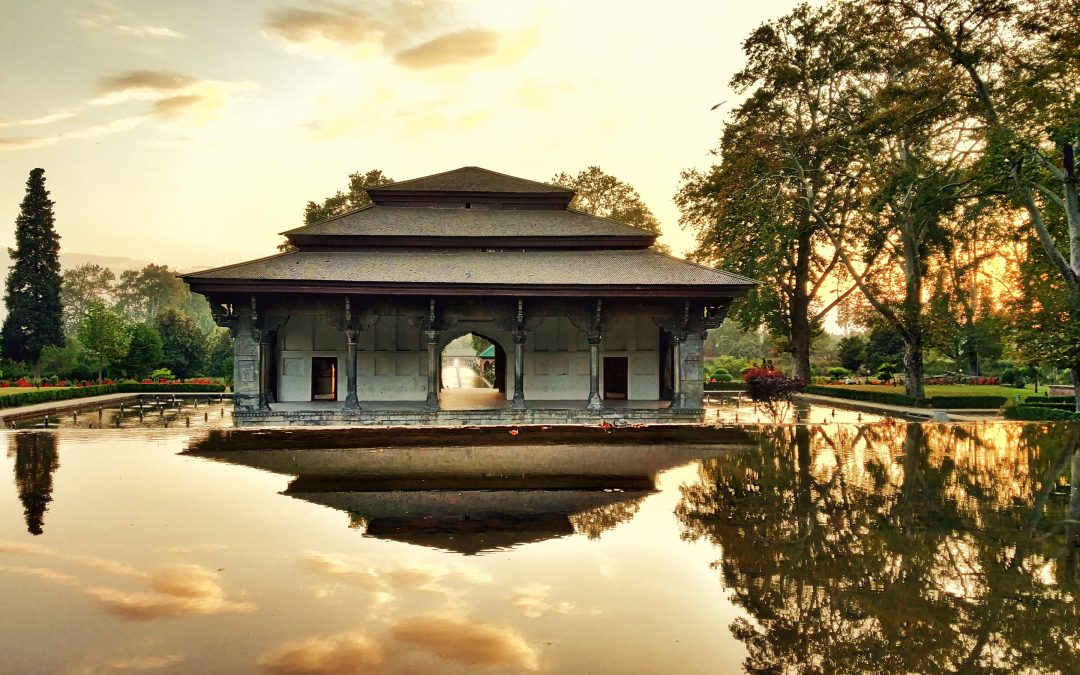 Shalimar Bagh is located in Srinagar which is the capital city of Jammu and Kashmir. It is a Mughal Garden which is also known as Farah Baksh, Faiz Baksh or Shalimar Gardens. Built in 1619 by the Mughal Emperor Jahangir for his beloved wife Nur Juahan / Noor Jahan, It is a situated on the shore line of Dal Lake with a canal flowing from the garden into the lake.

The garden has three beautiful terraces which have a lot of architectural details. There are more than 400 fountains in the garden. The garden is known for the arched niches also called Chini Khanas, which are the small niches in the walls in which oil lamps were lighted at night and the reflection would be seen in the waterfalls.

The first one is a public garden or the out garden with the Diwan – e – Aam (Public Hall). In this hall a small black marble throne was installed over the waterfall.

The second terrace known as Diwan – E – Khas (Hall of the Noble) which was only accessible to the noblemen or the guests of the court. This terrace has two steps and is broader than Diwan e Aam. It has a carved stone platform which is surrounded by fountains from all sides. The royal bathrooms are near the north-west boundary of the enclosure.

The third terrace known as the Diwan – E – Zanana (Hall of the Ladies) is the top most terrace and is accessible after passing through two guard rooms to restrict the entry to the Harem. There is a baradari in black marble which is also known as the Black Pavilion in the Zanana Bagh.

Shalimar Garden can be visited throughout the year but the best time to visit is from Spring till Autumn (April – October).

Starting from Spring the flowers are at the full bloom and the garden is lively.

At the onset of winter i.e autumn the garden looks wonderful with the chinar leaves changing the color at the time of Sunrise & Sunset resembling fire from a distance.

Shalimar Garden Visiting Timings: The garden is open from Sunrise to Sunset.

How to reach Kashmir to Visit Shalimar Bagh:

o visit Shalimar Bag you have to reach to Srinagar.

There are many direct flights to Srinagar International Airport from Delhi , Mumbai , Chandighar, Jammu & Amritsar. The flights can be connected with any other destination as the flights start from early morning till late evening.

The nearest railway stations to Srinagar are Jammu Tawi & Udhampur. After deboarding the train you can book a seat in a shared Jeep to Srinagar or hire a cab to Srinagar,

Srinagar is connected to rest of India through NH-44 which used to known as NH – 1A prior to the new numbering of highways in India. The distance from Delhi to Srinagar is 860 Kms and from Jammu it is 260 Kms.