At Pandrethan, nearly 8 kilometers from Srinagar, Ashoka the Emperor founded the Srinagar city in 3rd Century BC as recorded in the Rajtarangni of Kalhana. Until 630 AD Srinagar remained the capital city of Kashmir when Parvarasana II established the new city called Parvarapura near Kohi i-Maran (Hariparbat Hill) – the present city which later came to be called Srinagri. The present city of Srinagar is the summer capital of Jammu & Kashmir State situated at an altitude of 1590 meters (5209 ft) having latitude 23-04′ North and longitude 74-48′ East.

With its almost medieval charm, the city of Srinagar has sights, smells, and sounds to enchant the most jaded traveler. It’s typical roads and bustling bazaars are a photographer’s delight. A Mughal fort, developed to its full size in the late 18th century by an Afghan governor named Atta Mohammed Khan around and atop Kohi-i Maran dominates the city. The low wall enclosing the upper part of the hill was constructed by Emperor Akbar. Sprawling from the southward from the base of the Hill, the old city is the nerve center of Srinagar. In Persian chronicles, it is called “Shehr-e-Khas” or the Main City of Kashmir. Srinagar has long been Kashmir’s most important commercial town. Boats have been a primary means of conveyance in the past. On the banks of river Jehlum, an arterial waterway, the city is formed over a dozen of bridges which span the River and include Zero bridge, Abdullah bridge, Amira kadal, Budshah kadal, Habba kadal, Fateh kadal, Zaina Kadal, Ali kadal, Nawa kadal & Safa kadal. Old brick buildings line the banks with distinctive looks.

Srinagar is commonly done by bus or taxi. Another way of seeing the city, especially the lake area, is by shikara. It is particularly pleasant to row over the waters of the Dal Lake to visit the Mughal Gardens and other lakeside sites, including the famous Hazratbal mosque.

Shalimar Garden: was built by Mughal Emperor Jehangir in the year 1619 AD and called it “Farah Baksh” (the delightful). Eleven years later Zaffer Khan the Governor of Kashmir during Emperor Shah Jahan’s reign extended the garden and called it “Faiz Baksh” (the Bountiful). The garden was graded in three sections. The outer garden is known as the Diwan-i-Aam, the central porrion the Emperor’s garden called as the “Diwan-i­Khas” and the uppermost by far the best garden was meant for the Empress and her ladies. The romantic effect of numerous fountains in large tanks and central water channel, cascades, and monumental pavilions, mighty chinars, lush lawns laden with colour and fragrance speaks volumes for the taste of Great Mughal. The garden covers an area of 12.40 ha.15 kms from the TRC 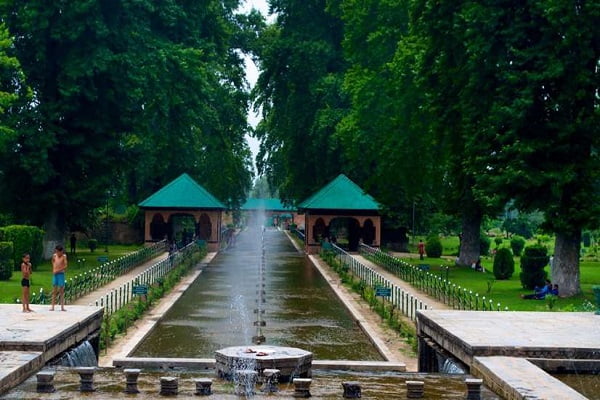 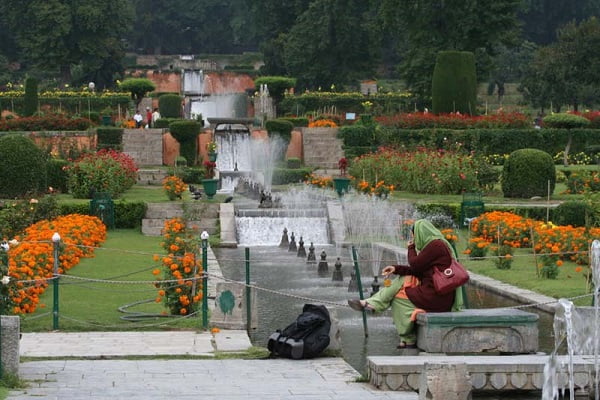 Nishat Garden: the garden of Delight, the largest Mughal Garden on Dal-Lake was laid out by Asaf Khan, brother of Nur Jahan, wife of Jahangir, in the year 1632 A.D. It is located on Dal-Lake about 2.5 Kilometers to the south of Shalimar and commands a magnificent view in the west and has a panoramic backdrop of mountains in the East. The garden had originally 12 terraces. Enchanting the central water channel, rippling fountains in large tanks and channels, and sparkling cascades amidst bountiful colors, lush lawns, and mighty chinars are principal features of this pleasure garden. The garden is spread over an area of about 20 ha.

This garden of the royal spring was built in 1642 A.D. by Ali Mardan Khan, the Governor of Kashmir during the reign of Emperor Shah ]ahan. It is a terraced garden situated 9 Km away from Srinagar and about 2 Km up from the main road in a mOllntain side over-looking Dal-Lake. Fountains play in the central water channel starting from the famed spring located in the uppermost terrace. It is famous for its pure, sparkling, and cool mineral water. To cope up with the ever-increasing tourist traffic the garden has been extended in recent years. It has also been lit recently with multicolored garden lights. This has proved an added attraction for tourists as well as 10cals. The garden extends over an area of 6.20 ha.

The name Pari Mahal appears to be a distorted version of “Peer Mahal” built by Prince Dara Shikoh, eldest son of Emperor Shah ]ahan in the year 1640 A.D. for his tutor Peer Mullah Shah. Once the royal observatory, it is a seven terraced garden located on the base of Zabarvan mountain range over-looking city of Srinagar and Dal-Lake.

The Mahal Built for the meditation and summer residence of Peer Mullah Shah is a replica of typical Mughal architecture in the garden layout, water now been restored to its glory with captivating terraced gardens, the motorable road up to the garden, and wonderful lighting effects which look marvelous and captivating at night. It covers an area of about 3.20 ha.

Chashma Shahi: has a tastefully laid garden in terraces, which commands a magnificent view of the Dal Lake below and surrounding mountain ranges. The cool water of the spring is highly refreshing and digestive. The original garden was laid out by Shah Jehan in 1632 AD. By the side of Chashma Shahi Garden are huts where some of the state government officials have their official residences to enjoy the luxurious stay while serving the Jammu & Kashmir.

On the hillside, south of the village of Harwan (19 km from the TRC)), remarkable remains of ancient ornamented tile pavements of the Buddhist period have come to light. The tiles depict the dresses of the people, such as loose trousers, Turkoman caps, or close-fitting turbans and large ear-rings which reveal Central Asian influence. It is an ASI site. This beautiful landscape garden took birth in the year 1969 on the enchanting Zabarwan mountain slopes near the famous Mughal Garden Cheshmashahi, over­looking the panorama of Dal-Lake. This pleasure garden complex extends over an area of about 80 hectares and consists of several styles of gardens with unending joy for seekers of solace on informal and undulated landscape. It comprises of four components- Recreational Garden, Botanical Garden, Research Section, and Plant Introduction Centre. A beautiful lake spread over an area of 17 hectares with joy riding boats is also the attraction of the garden. The garden provides a 3.5 Kilometer joyride, a pleasant water garden, inspiring colour feast of spring, fragrance and colour pageantry of roses, riot of colours in summer, changing autumn colours and captivating twitter of waterfalls. Over 1.5 Lakh ornamental plants, representing about 300 plant species have been planted in the garden. 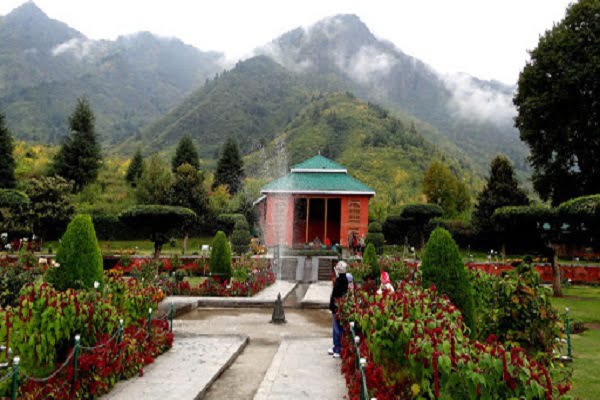 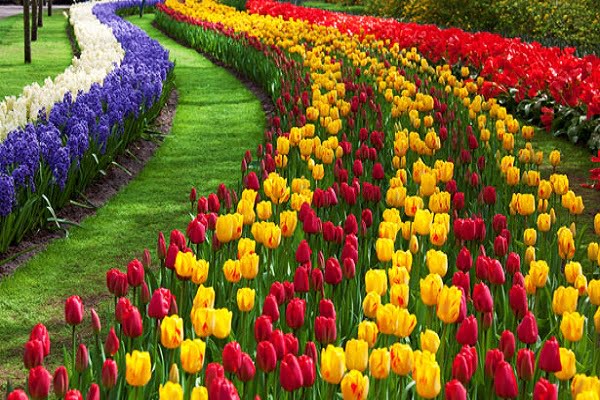 Tulip Garden: previously named as Model Floriculture Centre, Sirajbagh, Cheshmashahi Srinagar, is spread over an area of about 30 ha situated On the foothills of Zabarwan Hills with an overview of picturesque world famous Dal Lake. This garden was conceived, conceptualized and created by Mr Gh. Nabi Azad, the then Chief Minister, J&K in the year 2006-07. The main aim of this garden is to boost floriculture and advance tourism in Kashmir Valley. Over 12 Lakh tulip bulbs of 68 varieties of different colours sown during Nov-Dec, 2007 presented a breathtaking view.

Dal Lake is one of the most beautiful lakes of India and the second largest in the J&K state. Its three sides are surrounded by majestic mountains and a large number of gardens and orchards have been laid along the shores. The campus of the University of Kashmir is also located along the shores of the lake. Dal Lake is unique in having hundreds of houseboats, which afford an opportunity for tourists to reside on the lake in an atmosphere of peace and tranquility.

Nigeen Lake is located just a small distance away from Dal Lake. In fact, both the water bodies are interconnected by a small water channel. In the summertime, the water is pleasantly cool. The lake is one of the best ions, which you can enjoy a captivating round of boating. Even in the middle of the lake, you can experience the thrill of shopping. There are boats that are full-fledged shops on the move. You can buy eateries exquisite handicrafts, even the famous Pashmina shawls, and if you wish, you can even make a call from the mobile phone booths, Srinagar has a wide variety of accommodation, including deluxe hotels, guest houses, and houseboats.

While the summer (June-August) temperatures of Srinagar are between 20 deg and 30 deg C, temperatures in the hill resorts are considerably lower. In the evening, light woolens are required for Gulmarg, Pahalgam & Sonamarg, but not for Srinagar, Spring (March-May) and Autumn (October-November) are cold. With minimum temperatures plunging down to 7 deg C, woolens are necessary. During Winter (December-February), most places are below freezing point and temperatures sometimes reach minus 10 deg C in Srinagar, and heavy woolens are required.