Considered as a heaven on earth and enclosed by high snow-capped ridges of the Pir Panjal range to the west and south, and the main Himalayan range to the east is the picturesque Kashmir valley with a predominantly Muslim population, history of which dates back to the 14th Century. The words of Mughal Emperor Jehangir have been repeated down centuries by travelers enchanted with this fairy tale of mirror-like lakes, tumbling rivers, and verdant meadows

Often touted as paradise on earth for its spectacularly breathtaking beauty, the capital of Kashmir – the valley of Srinagar – at the foot of the mighty Himalayas, with its expanses of placid lakes, rapid rivers, rolling meadows, immaculate flowering gardens, and the chinar (maple) tree that reflects the changing seasons from the fresh green of spring to the russets of autumn that are shed for winter – tugs at the eyes and heart-strings of the beholder.

A houseboat on a placid lake ringed by flowering trees is by far one of the most attractive choices for accommodation, setting the tone and pace for a visit to this ethereal city and the WelcomHeritage Gurkha Houseboats on the Nagin Lake is an amalgamation of all that is the last word in pampered comfort, elegant lavishness and abiding romance. 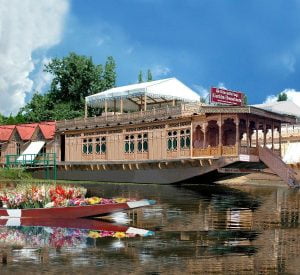